Two days meeting of Rashtriya Parishad of Swadeshi Jagran Manch concluded on 5- 6 June 2021 through online mode. The inaugural session of the meeting, divided in four sessions started at 5:30 evening. Besides National Convener, Shri R. Sundram and central officials, the meeting was attended by regional conveners, organizers and newly nominated members to the Parishad totaling 264. It was attended by Karyakartas from allied organizations as well.

While coordinating the session, National Co-convener Shri Ajay Pataki ji presented the introduction and discussed the activities of the Manch in last few months. Half minute of silence was observed as a mark of respect to all Karyakarta brothers and sisters departed during the pandemic.

In this session, an account of major activities being carried out during this period in the states of Kerala, Tamil Nadu, Karnataka, Andhra and Telangana were presented. Region Convener Shri Manjunath ji informed, how while serving the patients, our Karyakartas are engaged in the ongoing signature campaign day and night. Similar account of the activities carried out in the states of west, central, Rajasthan and north region were presented and was very inspiring. Every one specifically mentioned about the progress made towards the UAVM campaign – universal access to vaccines and medicines.

The Vice Chancellor of Gautam Buddha University and Central Authority in SJM, presented the resolution for making the vaccines & medicines patent free and easily accessibly for all. During the discussion, he emphasized on the need for planning for innovations, increase in production capacity and consideration of the requirement of the world. He said, safety of people, which is their fundamental right, is more important than the profits of patented companies.

Dr. Ashwani Mahajan ji explained the worries and ongoing discussion on the origin of Corona virus and pointed out that Chinese suspicious role, now is being discussed from India to America. He stressed that now enough evidences are available on how the virus originated and leaked from China.

This session was conducted by Shri Manjunath ji, convener of South Central Region. The Vice Chancellor of Kurukshetra University and Co-convener, North region, Prof. Somnath Sachdeva ji, informed about the organization of international webinar and signature of 2120 intellectuals from the institutions of higher learning. The webinar organized by Howard University, USA, Gautam Buddha University, and Haryana State Higher Education Council was widely praised. It was attended by the US senator, Howard University Prof.& Dean Dr. Narendra Rustagi. Information about the big webinar organized in India in which Swami Gyananand ji Maharaj, Nitin Gadkari and Central Minister of State Mansukh Mandaviya addressed the participants was also shared. So far, petition for patent free vaccines has been signed by 7.5 lakh people. During the session C.A. Balram Nandwani ji provided information about the progress of Swadeshi Shodh Sansthan and the funds collected so far. The Bhumi-Pujan of the Bhawan was completed in the presence of Manniya Shri Dattatreya Hosabaleji, Sar. Karyavaha, RSS. He expressed the hope that funds collection obstructed due to corona shall be resumed shortly. National Convener, Shri R. Sundram ji, expressed his views on Economic Restructuring Post Covid and emphasized on the need to adopt liberal attitude towards business along with government efforts to generate to new avenues of employment and production. Similarly, Dr. S. Lingamurthy speaking on the topic - Economy and Employment post Corona presented data from the international organizations and emphasized on need for rural industrialization and employment generation by strengthening education and Religious Tourism. National Co-convener Sh. Arun Ojha ji expressed his views on the role of Dunkel proposals, Uruguay round and three major economic institutions of the world. Dr. Ashwani Mahajan introduced Chief Executive Officer of NATCO company Shri Rajiv Nannapaneni to the deligates. Natco was the first company to get compulsory license to manufacture medicine for the treatment of liver cancer at 10% of the world’s price and made it available in India and the world. He was Chief-Guest of the session. He criticized the multi-national pharma companies who are demanding the extension of patent period from the present 20 years to 30-40 years. He stressed that if we have to provide cheap and easily accessible medical facilities in the world then patent time has to be reduced. After this Shri Ajay Pataki ji informed about the book titled Vaishvik Mahamaari Corona: Opportunities and Solutions written jointly by Prof. Bhagawati Prakash Sharma jiand Shri Satish ji and said that soon the book shall be translated in other languages and made available to all.At the conclusion of the session Shri Satish ji explained the Patent-free vaccine campaign and the existing world scenario on the issue. He said more than 20 lakhs people and 200 noble laureates and former heads of the states in the world have demanded for the patent free vaccines from WHO head to 120 heads of states have come forward in support of the demand. The movement is getting the support of European Union China and Japan. This is a movement based on truth and shall succeed.

This session was coordinated by Akhil Bhartiya Vichar Vibhag Pramukh Prof. Raj Kumar Mittal (Vice- Chancellor). During the session, Padamshree Dr. Rajni Kant shared information about the geographical indication tag. He himself is instrumental in getting GI tag to 53 products. In 9 divisions of Kashi, the business of 20 lakhs weavers has increased to the extent of 32%. He informed that in India only 370 GI tags have been registered, while in China the number is 9000 and USA it is 4000. Therefore, India has to make big efforts to increase the number. After that, Akhil Bhartiya Mahila Pramukh Smt. Amita Pataki ji explained the role being played by the women in signature campaign by citing the reference of Tilakji.

Rashtriya Sangathak Shri Kashmiri Lal ji, presented the framework before the delegates for the forthcoming events, which include:

1.    On 12th June evening to 13th June evening everyone should start special signature campaign by taking together all karyakartas and family members.

3.    On 20th June World Awakening Day shall be celebrated in all 379 districts and countries so as to give wider support to Patent free vaccine.

4.    Collection of money for Swadeshi Shodh Sansthan shall be restarted after lockdown period is over.

5.    State wise Vichar Varg shall be organized in the month of July and August.

To conclude the Rashtriya Parishad meeting, Shri V. Bhagaiya ji, member of Executive Council of RSS in his address appealed to all Karyakartas to engage themselves in signature campaign with full force. He said that Swadeshi Jagaran Manch has not only performed the social services but by taking together associated organisations, intellectuals and social organisations has started this campaign. He also supported the manufacturing of Ayurvedic medicines and treatment system. To develop the karyakartas, he stressed that karyakartas must work to acquire the qualities like - sweet talker (sugar in mouth), have wheel on feet (pairmeinchakar) and fire in heart. He said that we are working for the benefits of the entire humanity and shall get the cooperation of all organizations.

In the end, National convener Shri R. Sundaram ji provided information about the newly constituted Rashtriya Parishad and made new announcements. He expressed his confidence that not only we will come out of the Corona pandemic, but also take care of our economy and employment very well. He expressed his views on shifting from less China to China-less economy in next 6 year. Prof. Raj Kumar Mittal ji thanked all and the meeting ended with the recitation of national song Vande Mataram. 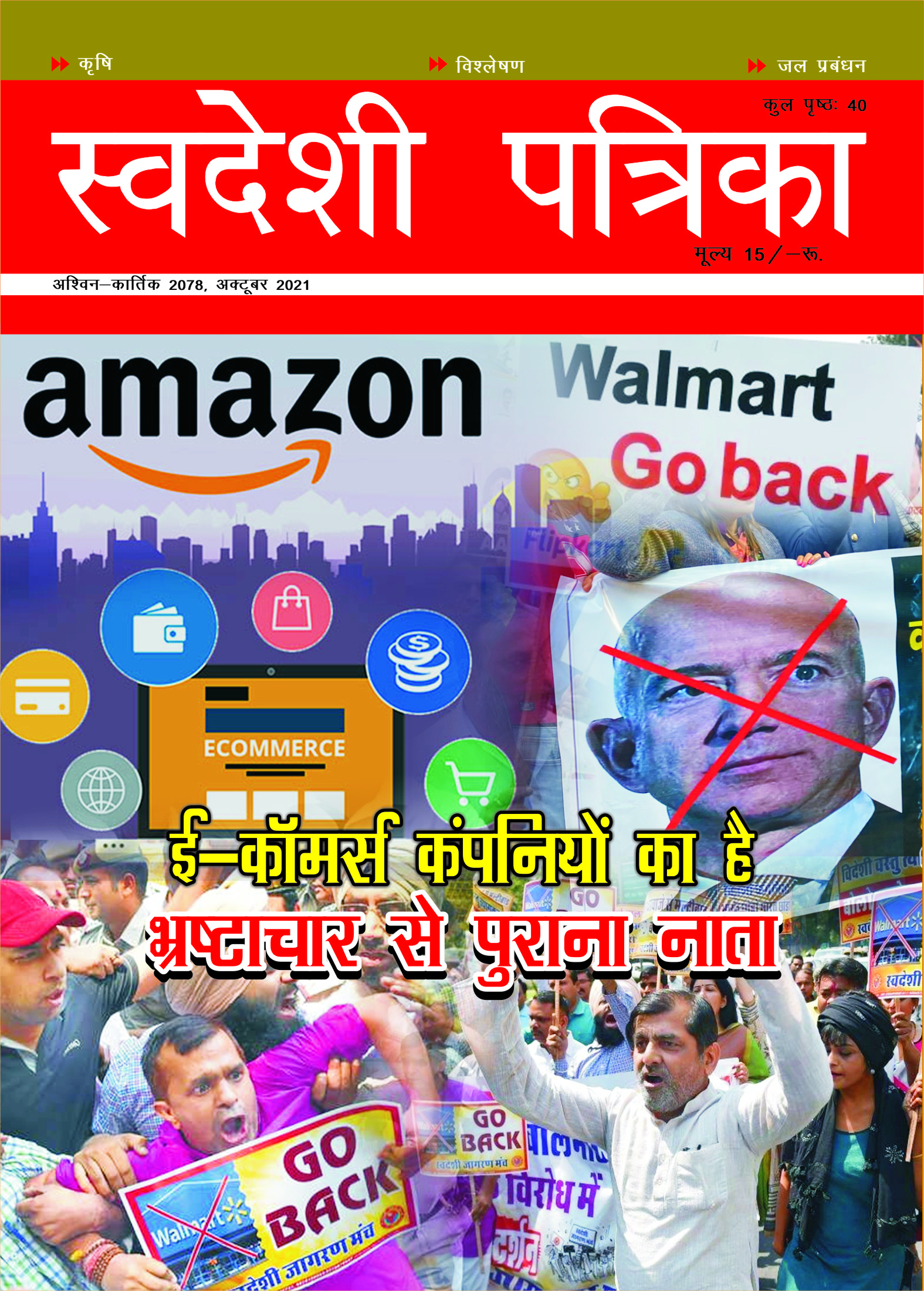